Skip to content
Previous
How to Get Rid of Fire Ants

At the beginning of this year, Julie, a consultant for Organic Control, Inc., moved from Southern California to the Southeast. About a month ago, she noticed strange new mounds in her backyard that seemed to have appeared overnight. With a little research, she discovered the source of the mounds: the Red Imported Fire Ant.

Known as RFAs or RIFA (Red Fire Ant or Red Imported Fire Ant), or Solenopsis invicta Buren, S. richteri Forel for the more scholarly, these invasive insects were introduced to the U.S. in the late 1930s from South America. It is suspected that they arrived in soil that was used as ballast in cargo ships. Since they landed in Mobile, Alabama, they have spread across much of the southern U.S.

While North America has its own version of fire ants, the difference between native and imported ants is the aggressive nature of the Red Imported Fire Ant. They will quickly and aggressively defend their mounds when disturbed, so any humans undertaking an attempt to eliminate them should beware that they will react strongly.

Measuring from ⅛ to ¼ inch long, RIFAs are reddish-brown in color. Here are some other characteristics:

The hard mound-shaped nests of fire ants seem to spring up overnight in open, sunny lawns and baseball fields, as well as in cultivated fields. Ranging from 18 inches to 2 feet high, these mounds are distinctive from other ant structures. They may also appear in rotting stumps or logs. 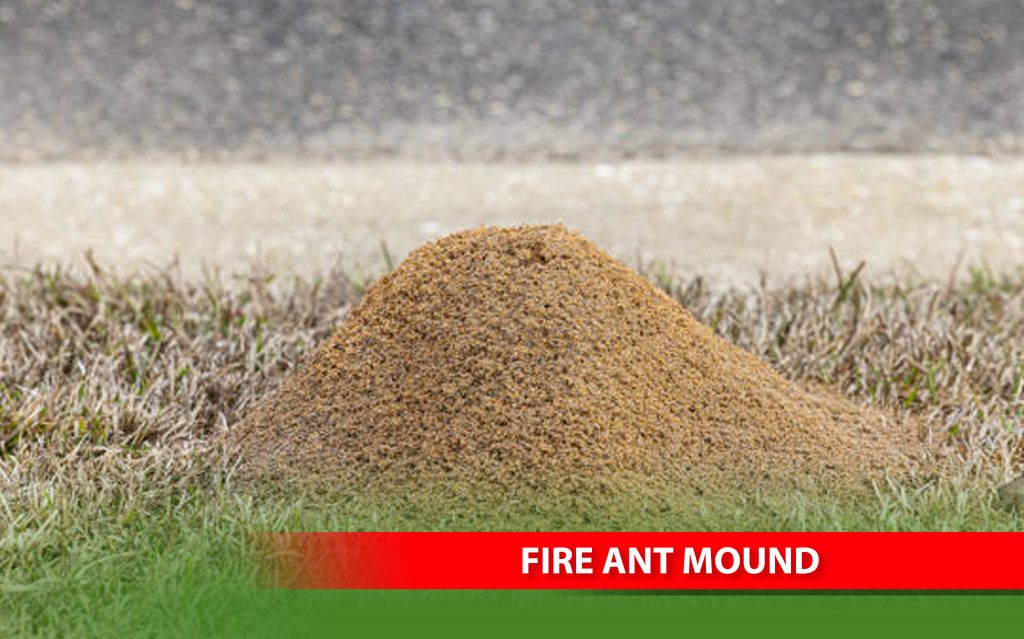 Red Imported Fire Ants are a blight for many reasons. Not only do they take over and displace native ant populations, but they also don’t provide a food source for other wildlife. These fire ants feed on the fruit and buds of many crops: corn, soybean and citrus. They can damage young trees in a process called girdling.

But most disturbing is the hazard RIFAs pose to animals and humans. RFAs are spreading throughout the southern U.S. They pose a terrible threat to field workers as they use their mandibles to cling to their victims while delivering multiple stings. People report that the fire ants swarm over a person or animal and somehow signal each other so that they sting simultaneously, delivering intense pain. Toddlers and small children are at greatest risk. In severe cases, these venomous stings may cause allergic reactions and even death.

At the beginning of 2000, the USDA Code of Federal Regulations established a quarantine for the invasive Red Imported Fire Ants. This map shows the quarantine that covers a giant area from Texas to Virginia: 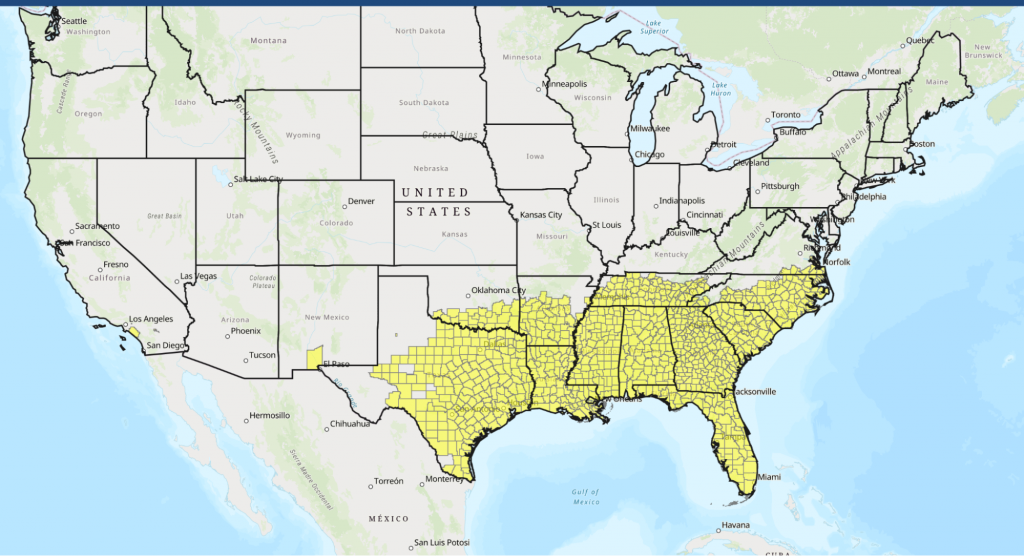 This map shows the potential expansion of the Red Imported Fire Ants as they spread beyond their current habitat. They can be transported in baled hay, live plants, and soil that is moved from affected areas (image source: researchgate.net): 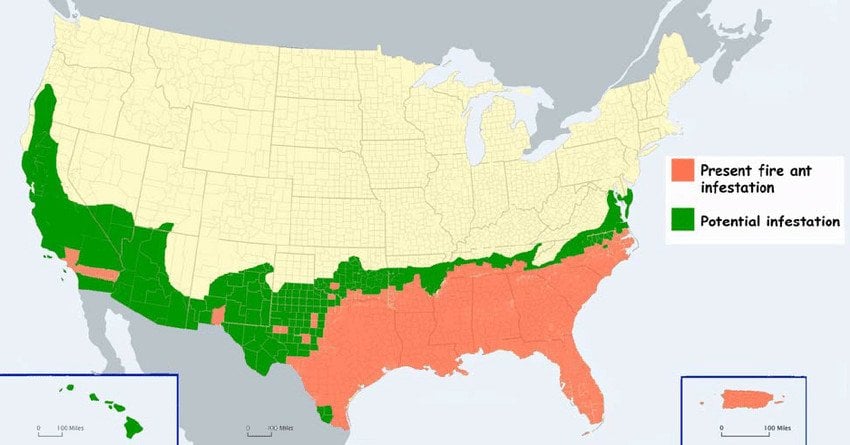 The public is requested to report any RIFA sightings to a local extension office of the USDA. This link can help you find the office near you; https://offices.sc.egov.usda.gov/locator/app. To report a sighting of RFA in your area, click on the link below:

HOW TO GET RID OF RED IMPORTED FIRE ANTS

In a yard that hosts family pets or children at play, or in an orchard that provides food for us, chemical solutions are clearly not the best solution. And it’s worth noting that any interaction with red fire ants poses a danger of being stung. ANY SOLUTION you attempt should be well-researched and performed carefully – proceed at your own risk.

So what to do to rid your yard of fire ants? While many enterprising gardeners have tried methods to combat the Red Imported Fire Ants, their approaches range from ineffective and costly to outright dangerous and illegal. And even these methods fail to treat the infestation at its source – the Queen Ant, who may lay up to 800 eggs per day (and the eggs mature within as few as nine days).

Pesticides are only effective against the ants that come into direct contact with them. Often, the result of pesticides is that the colony simply relocates to a close-by alternative site. Chemical solutions are harmful to the soil, dangerous to other living things, and they pollute the groundwater. What’s worse, it appears that the ants are developing a resistance to insecticides.

Concerned homeowners are left with having to choose among harmful or dangerous solutions. But, there is hope! Beneficial Nematodes are the ideal way to combat red fire ants naturally, and without chemicals.

Julie, our California transplant, told us her story:

“For the first time, we encountered Fire Ants in our yard. Having been warned about fire ant bites and what a nuisance they are, we looked for a product that would get rid of them. We now have a large yard that is frequented by all kinds of wildlife, so our first criteria was to find a product that did not have any harmful chemicals but still would be effective at eliminating fire ants. Guess what? No luck. We looked at nurseries and big box stores, but couldn’t find anything that was all-natural and yet still effective. Then, we heard about Beneficial Nematodes from Organic Control, Inc. We mixed it up as directed, poured it down the hole, and the results were SHOCKING. We went out the next day to check on the mounds, and there wasn’t a single ant in sight. They had just vanished.”

WHAT ARE BENEFICIAL NEMATODES, AND HOW DO THEY WORK?

Beneficial Nematodes (Steinernema Feltiae) hunt, penetrate and destroy fire ants. They are amazing warriors who immediately set to work finding ants and their larvae. They have a wide search pattern, so once applied, they will penetrate the mound to find the eggs that are distributed throughout the colony. Nematodes invade any orifice of both adult and developing fire ants, where they release symbiotic bacteria into the body cavity; this disables them almost immediately, and the bacteria kills the ants from the inside. Then, as though in triumphant celebration, Nematodes set about building nurseries for their own young inside the bodies of their fallen prey. In a continuous cycle, new Beneficial Nematodes emerge to attack any newly hatching ants.

Like microscopic but mighty sharks, these champions of the food chain not only kill off the living fire ants, but they also penetrate as deep as ten feet into the soil at the base of the colony, eradicating the next generation of fire ants. BN will attack over wintering adult insects, pupae, diapausing larvae, when they are in the soil, bark, or even ground litter. They do not affect humans, animals, or plants. They are completely compatible with beneficial insects such as ladybugs, lacewings, and praying mantids and do not harm earthworms.

What is particularly amazing about Beneficial Nematodes is that they are actually more effective than chemical solutions. When you water your garden, any poisons that were applied to kill pests seeps down into the water table, finding its way into the water you and your neighbors use in your homes. Because beneficial nematodes rely on water to allow them to move through the soil and hunt down their hosts, the act of watering your plants serves to improve their effectiveness. They attack the problem at its source, and they continue to do their work long after application. While ants must stumble upon chemicals and touch or eat them to be infected, the Nematodes actively hunt the ants down and deliver the symbiotic bacteria directly into them. There’s no such thing as developing a resistance to being eaten from the inside out!

HOW TO USE FIRE ANT CONTROL FEATURING BENEFICIAL NEMATODES

Beneficial Nematodes are stored in vermiculite in refrigerated containers.

Click here to watch this video on how to make a family-safe, nontoxic “Beneficial Nematode Tea” to pour directly into the Fire Ant Mounds:

They may be used any time of year, as long as the ground is not frozen. Do not release in direct sunlight, as this will kill them.

You can read more about our product Fire Ant Control on our website by clicking here.

Plus, you can find a garden center or nursery near you that carries Fire Ant Control here.